A row of townhomes on Leverette in Corktown is celebrating its 125th birthday in the historic neighborhood this year. After fresh renovations, the seven condos at Leverette Homes are back with modern interiors and new residents.

The structure, reminiscent of brownstones in New York and greystones in Chicago, was built in 1895 by John Scott & Co., whose most well-known building is the Old Wayne County Building downtown.

In more recent years, the townhomes were rentals. The previous owner sold the property in 2017 to Leverette Homes LLC; along with some other properties, the deal closed at $3.1 million, according to James Tumey. Tumey worked with the developers on the new design, which included an overhaul of the interior, along with dark, not-quite-black trim on the exterior. Outside, they also rebuilt the porches, did tuck pointing to the brick, and rebuilt the bay windows on the second floor. The new exterior keeps details including the intricate iron work above the doorways that bears the original numbering of the units.

The units each have two bedrooms and two-and-a-half baths, with additional room in the basement, including a separate entrance. The layout has changed so there's a clear sightline from the front of the house into the back, and windows on the side of the homes bring in natural light. The direction of the stairway was changed to increase space.

The most striking element of design is black - not only on the exterior, but in the fixtures and cabinetry in the kitchen. 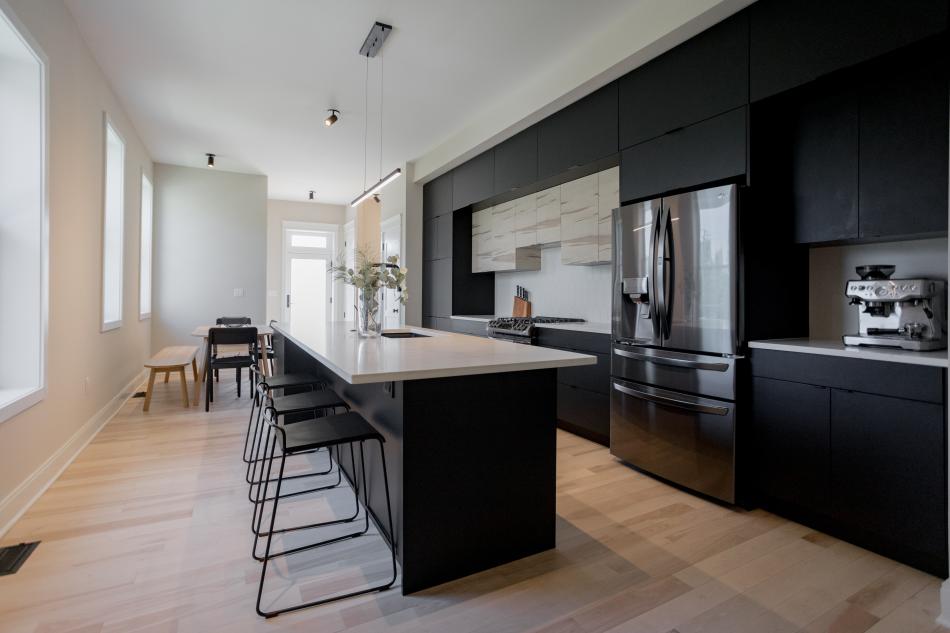 The kitchens have black, modern cabinets and an island. Sightlines go straight through the homes.Photos by James Tumey

Upstairs, the primary bedroom has the bay window overlooking the street, along with a large master bath and large walk-in closet. Exposed brick covers some of the walls and 12-foot ceilings make the rooms feel more spacious.

Residents have moved into three of the units so far, and another unit is set to close next month. The homes have sold in the mid-to-high $500,000s, and the one closing is in the low $600,000s. The remaining units should be complete this winter, and two more will be going on the market this fall. Landscaping will be completed as construction finishes on the townhomes.

It's good timing for a refresh of this kind of property, as Corktown gears up for Ford's move into the neighborhood. The properties are listed through James Tumey of O'Connor Real Estate.

See the gallery at the top of the page for more before and after photos.