Near the riverfront on the city's far east side, a new community center is under construction. Located in A.B. Ford Park, the new center will serve as a meeting place, emergency resource, and recreation center.

The building will replace the Lenox Center and will be located outside of the flood plain. Site work has started already, and the foundation will be poured next week.

The $6.68 million, 8,116-square-foot building is part of a $9 million revamp of A.B. Ford Park. The building will include learning spaces, classrooms, and indoor courts for kids' sports. 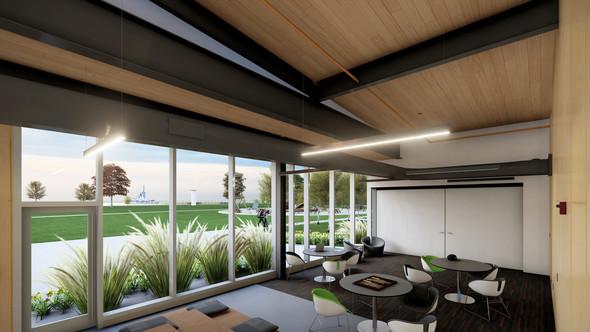 A community space overlooking the parkCity of Detroit

Thanks to $600,000 in grants from General Motors Climate Equity Fund and the Urban Sustainability Directors Network, the new building will be solar-powered and have a battery and generator, so in times of outages and flooding, residents can charge necessary items there.

The building is part of the city's Strategic Neighborhood Fund, which since 2017 has invested $112 million into neighborhoods around Detroit. For this building, $2.73 million has come from a Penske Corp donation and $3.95 million from City of Detroit funding.

The redesign of A.B. Park will include new walkways, playgrounds for younger and older kids, outdoor fitness equipment, Pistons-sponsored basketball courts, picnic and fishing areas, an arboretum, and a pollinator meadow. $2.13 million in funding for the park is coming from the American Rescue Plan Act.

The new community center is expected to open next year.