The Detroit Riverfront Conservancy is building a transformational new 22-acre park along Detroit's west riverfront. When it opens in 2024, the Ralph C. Wilson Centennial Park will include a play garden, walking paths, new sport courts, an event space, and many ways to enjoy nature. Also included will be a water feature that will be the Huron-Clinton Metroparks first physical location in the city of Detroit.

The 2.5-acre Huron-Clinton Metroparks Water Garden will have educational opportunities for visitors, places to sit and enjoy the surroundings, open-air classrooms, walking paths, and programming.

While this is its first physical presence, the Huron-Clinton Metroparks has been working with the Detroit Riverfront Conservancy since 2015 on educational programming along the riverfront. 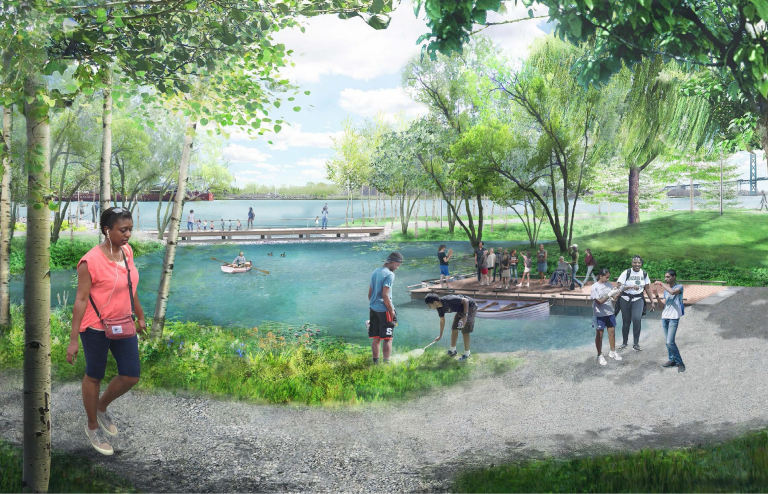 “The naming of the Water Garden is incredibly exciting for us,” said Amy McMillan, Director of Huron-Clinton Metroparks. “The Metroparks form a greenbelt of vibrant active and natural spaces around the metro Detroit region, but for decades there has been a gap in Metroparks presence within the city of Detroit. We are finally making progress towards closing that gap and establishing a physical presence that residents can engage with daily. We know we still have a lot of work to do, but we are grateful for this strong partnership that is helping us realize progress towards that goal.”

The Detroit Riverfront Conservancy officially broke ground on the Ralph C. Wilson Park last year after years of planning. Not only will the park become a major destination in the city, but it will create greenway connections along the riverfront and into Corktown with the Southwest Greenway.