If you've been to downtown Detroit in the last six months, you've likely noticed the unique 16-story building under construction at the edge of Greektown. Exchange Detroit is being built from the top down with new innovative technology from LIFTbuild, which grew out of construction firm Barton Malow. 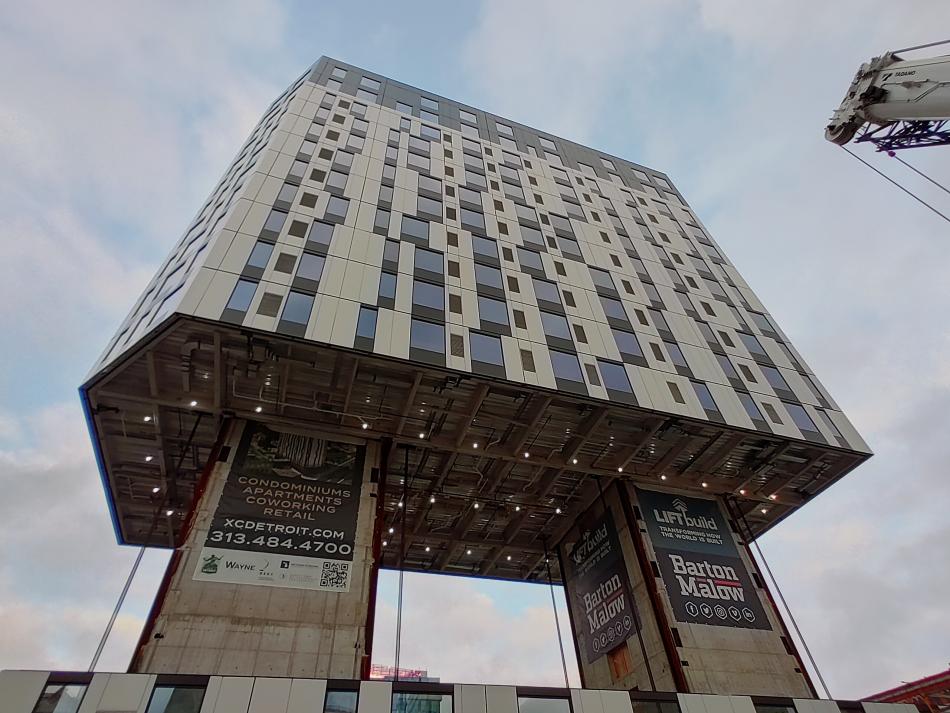 A current look at the Exchange progress.Robin Runyan

The one million pound roof went up in May, forming a pi shape with the two structural pillars. The 16th floor was then lifted and locked into place, and so forth. Today, the fifth floor is scheduled to lift. The fourth and third will go up in January, with the first and second floors built out after. I stopped by the project to learn more and see the views from the 16th floor. 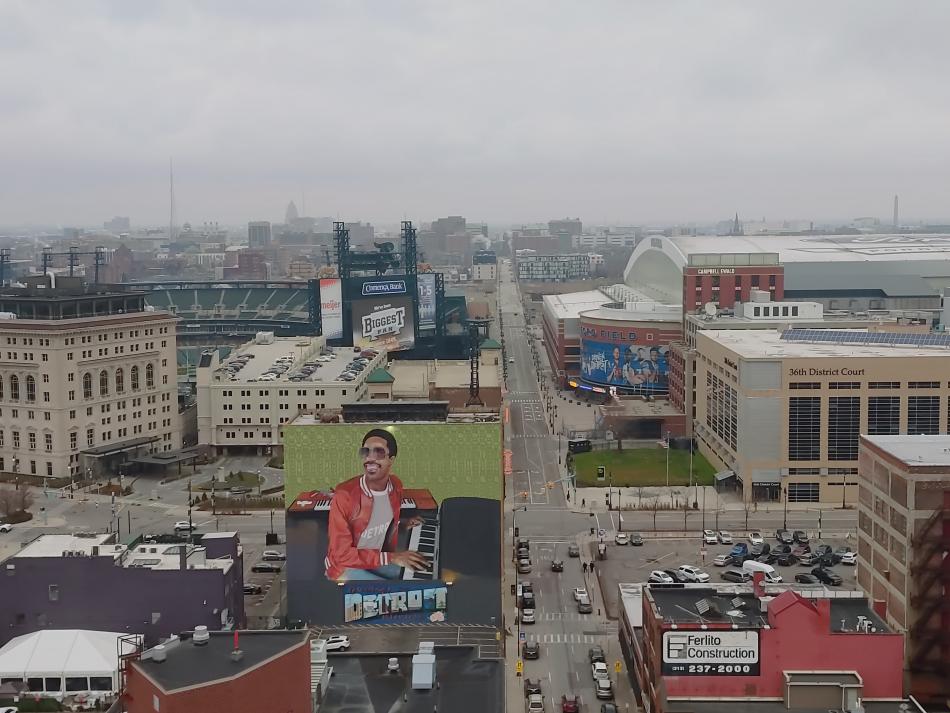 Looking out to Comerica Park and Ford Field from one of two penthouses.Robin Runyan

Each floor is built out on the ground, saving both cost and labor says Joe Benvenuto, COO of LIFTbuild. It also creates a safer work environment. After 15 months of construction, workers have a climate-controlled, enclosed space to finish each floor instead of being exposed to the elements high up.

Through this proof of concept, the team has created tools for design automation and they've seen great efficiencies in productivity and labor. In the development timeline, Barton Malow President and CEO Ryan Maibach says, "The process of site selection to ultimate execution, we see an opportunity for greater than 20-30 percent time savings." 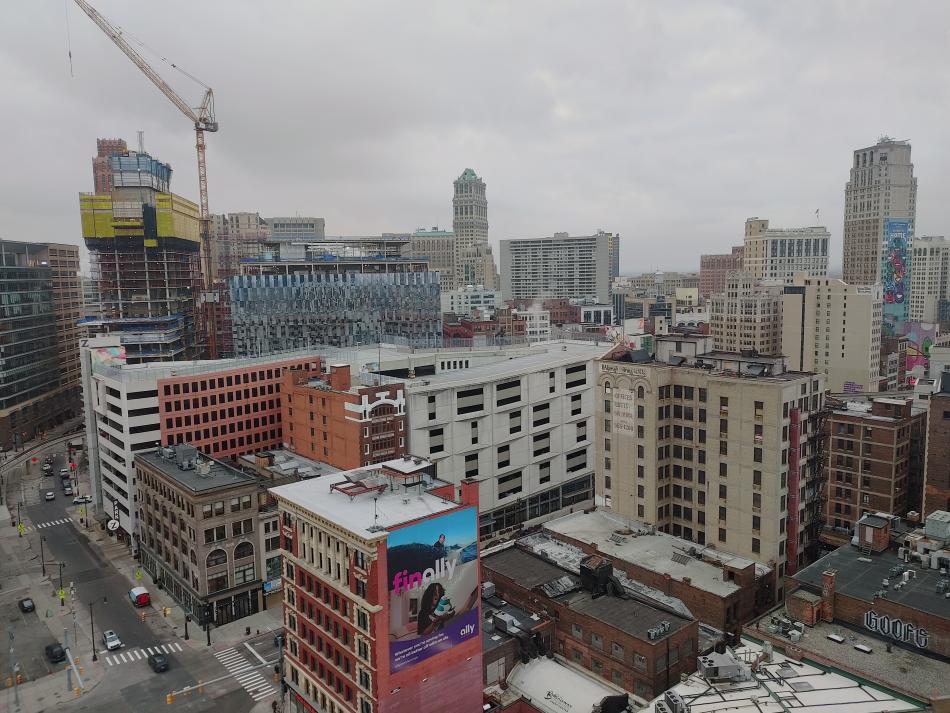 Some residents will have a great view of the Hudson's tower construction.Robin Runyan

Detroit was the right place to build this proof of concept, says Benvenuto. It's in the same place as Barton Malow, they had the partner traders here to work with, and there was a great site to build on Gratiot. When completed, it will add the first residential to Greektown in decades.

Exchange will bring 153 apartments and 12 condos to downtown Detroit, along with ground-floor retail space. Current pricing has apartments ranging from $1,725 for a 405-square-foot studio to $3,265 for a two-bedroom unit. Condos start at $519,900; multiple units are under contract and one penthouse has sold for $1.4 million. 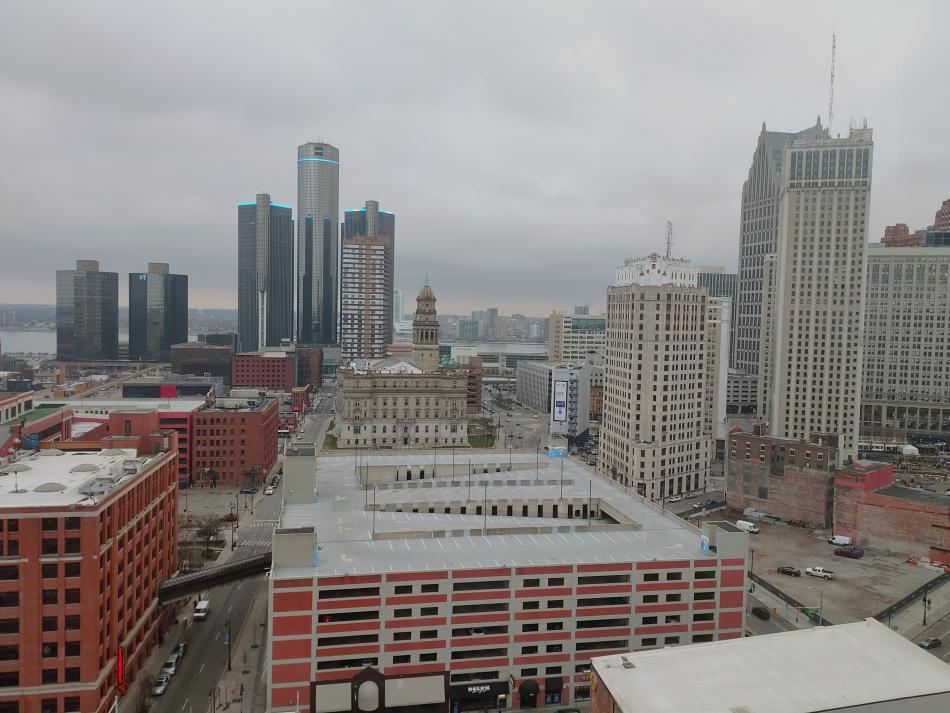 Some units will have stellar views of the fireworks in the summer.Robin Runyan

Amenities include a club room, a rooftop deck, a fitness room, valet, and controlling thermostat and locks through your phone. Also look out for a public park at Randolph and Gratiot for residents and the public, as a gateway to Greektown. Developers are expecting the Certificate of Occupancy in June.