A rehabbed apartment building and a new build are now home to 71 units of affordable housing in the North End. The project was led by Develop Detroit and Vanguard Community Development Corporation.

The $18.2 million project kicked off a year and a half ago. The 59-unit Marwood Apartments, which is listed on the National Register of Historic Places, now has renovated studios, one-bedroom, and two-bedroom apartments. Residents of the Marwood Apartments were given priority for moving back in when the building was completed, and 11 have moved back into renovated apartments with affordability guaranteed.

Next door, the new construction includes six townhomes with attached garages, and six apartments with a community center, adding density to the formerly vacant lot. 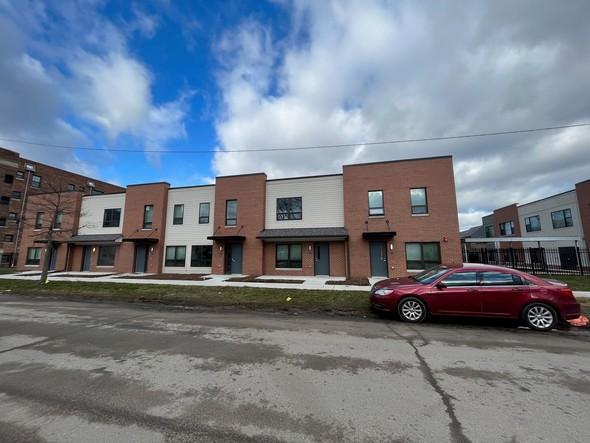 New townhomes at John R and MarstonCity of Detroit

“This project will serve as an excellent example of how inclusive development can be done,” said Develop Detroit CEO Sonya Mays. “We are proud to help build a community and work with the existing neighborhood to expand opportunities for its residents to succeed.”

Funding was pieced together through a number of channels, including a HOME grant, a Community Development Block Grant, funding from the CARES Act, Low Income Housing Tax Credits, MSHDA, a historic tax credit from Huntington Bank, and more.

Develop Detroit has completed multiple developments in the North End, Woodbridge, and Martin Park over the last several years, including the Freelon at Sugar Hill, opened last year.

Information for residents interested in applying for affordable housing opportunities can find out more here.